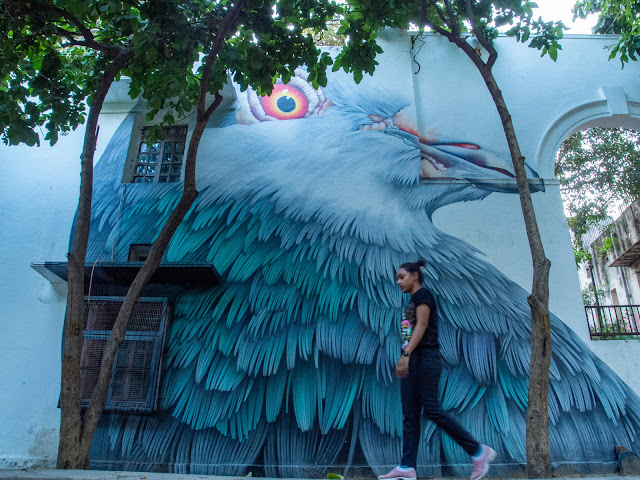 Lodhi Art District, the only ‘district’ in India whose entire length and width you can cover by foot under an hour, has got some new murals on the walls of the government flats that are scattered around this posh area lined with tall trees. Some of the murals are also recent ones that have not been published here. (See: All the 52 murals till April 2019, the following update and the last post before this update). St+art India Foundation has been supporting the artists and organising ‘walk festivals’ since 2015. For the upcoming guided walks, see this schedule.

Pigeons by Adele Renault (top)
Belgian street artist Adele Renault, 31, is known for her murals of very large pigeons. Ms Adele’s work is immediately relatable. Her interest in people and pigeons stems from the commonality that no matter the city, each can be found in abundance. With meticulous care and attention to detail, she renders an old woman’s face and a pigeon’s with the same precision. The ever-changing colours of the pigeon’s feathers are just as significant as the wrinkles in an old woman’s face. 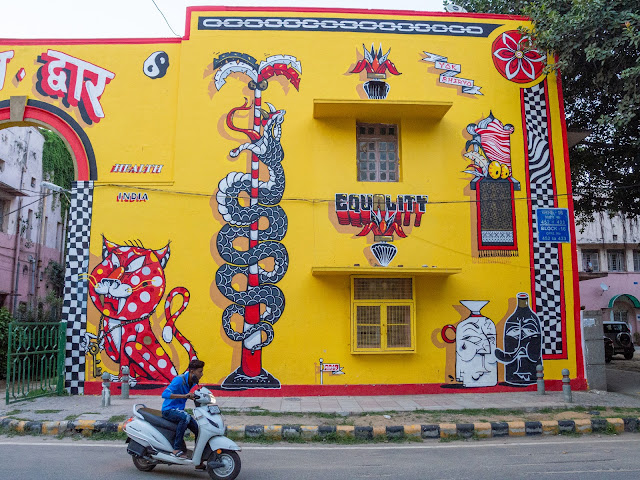 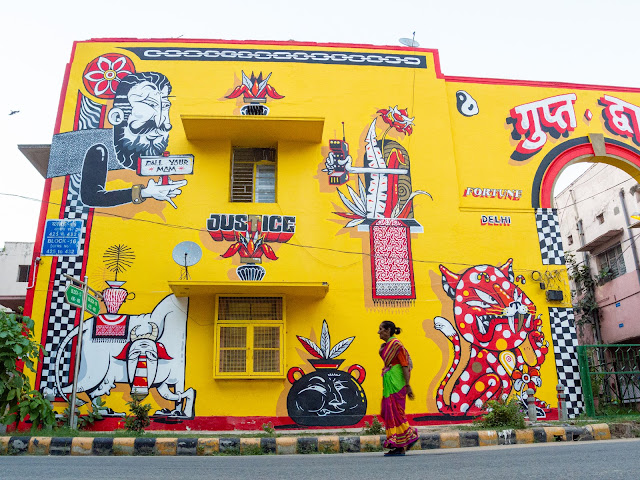 Gupt Dwar by Yok and Sheryo (top)
Singaporean street artists Yok and Sheryo took inspiration from Indian matchboxes and playfully encrypted a few hidden messages in the mural. They say they imagined Lodhi to be a land of hidden wonders, rich in culture and diversity and so wrote ‘Gupt Dwar’ (hidden door) on the central arch. (A mention has to be made here of another Singaporean artist, Yip Yew Chong, whose work at Lodhi Art District is my favourite). 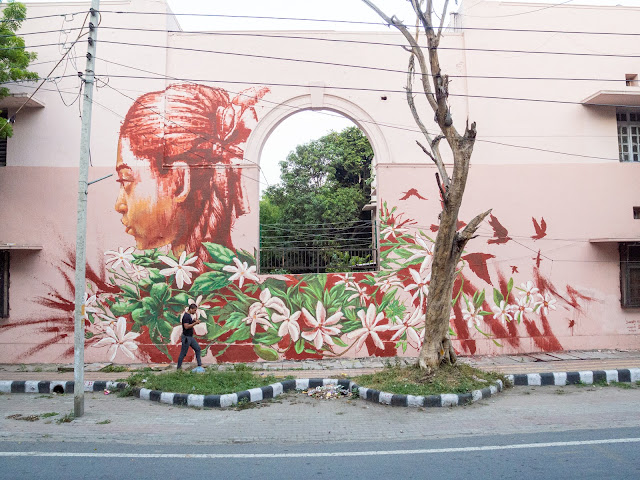 Dharavi’s Flowers by Alaniz and Federica (top)
This work is a collaboration between street artists Alaniz and Federica. Alaniz says the work is based on a photo he took of a young girl in the slums of Dharavi in Mumbai. “It was fun even with the heat,” he says. 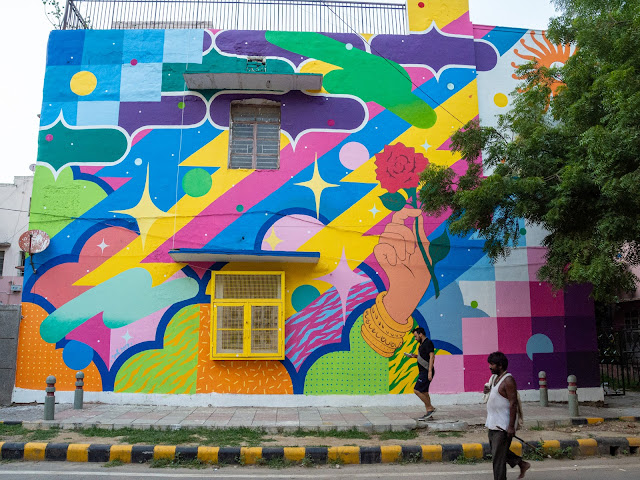 The Light Fort by Yoh Nagao (top)
St+art India says the pattern and symbols used for this composition by Yoh Nagao are a beautiful mash-up of the artist’s own ancestral visual wisdom and that of India’s generic tradition and culture. A sense of community and belonging are the core emotions around which this mural is done. Born in Yokohama and raised in Nagoya, Yoh Nagao is one of Japan's leading international artists. Since an acclaimed solo exhibition in Hong Kong in 2009, his works have been exhibited around the world including Switzerland, London, Paris, Berlin and New York, among others. “We will be the indigenous people of the future,” he says of his overarching theme that defines his work. 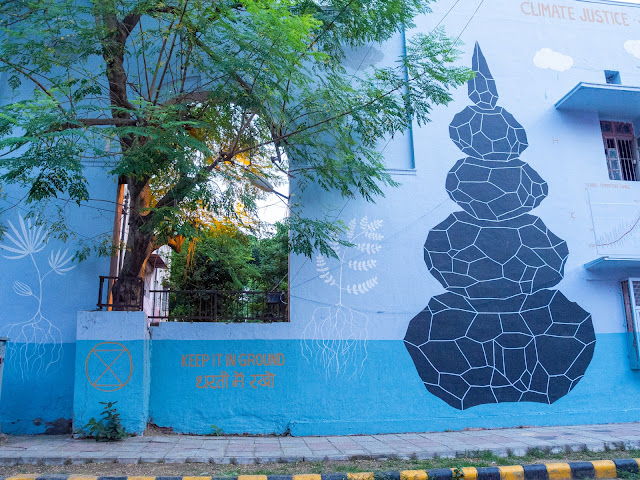 Climate 05 - Reclaiming Air and Water Quality by Andreco (top)
From its design to the ink used to the graphs drawn on the wall, Italian artist Andreco’s mural is about how climate change threatens the world. It’s a mix of environment activism with street art. Andreco is also a scientist. He has a PhD in sustainability, and did a post-doctoral research on green technologies for urban sustainability in collaboration with the School of Engineering and Architecture of the University of Bologna and the Columbia University of New York City. His artistic research is focused on the relationship between humans and nature, and between the built environment and the natural landscape. 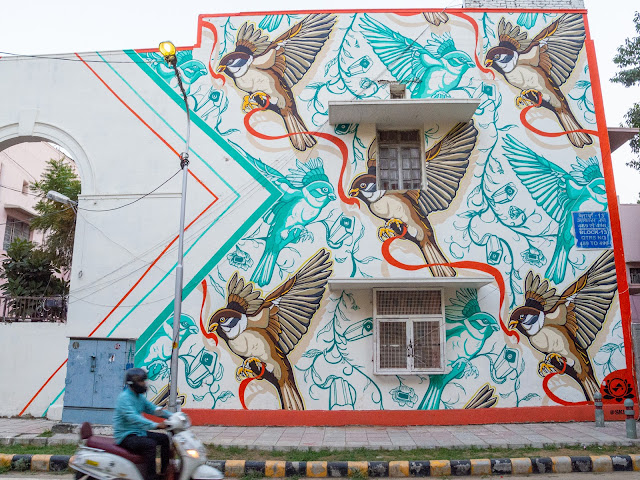 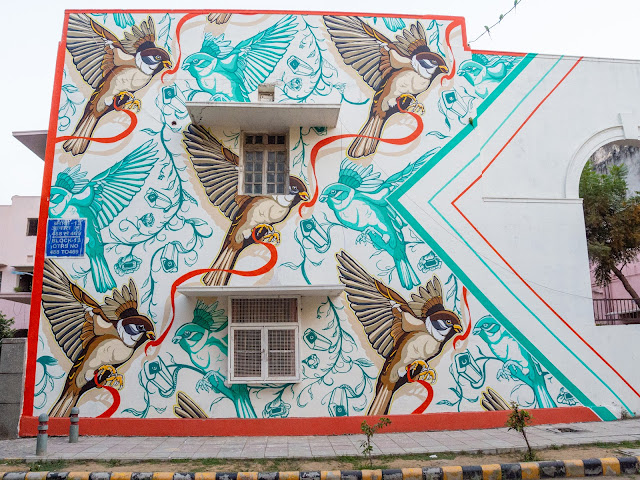 Cause and Effect by Sam Lo (top)
Singaporean artist Sam Lo's mural makes the wall a reflection on freedom and interconnectivity. (This is yet another confirmation that Singaporean artists have made some of the best murals at Lodhi Art District). Sam Lo is a self-taught visual artist whose work revolves around social commentaries fuelled by daily observations of her surroundings and research into the socio-political climate. 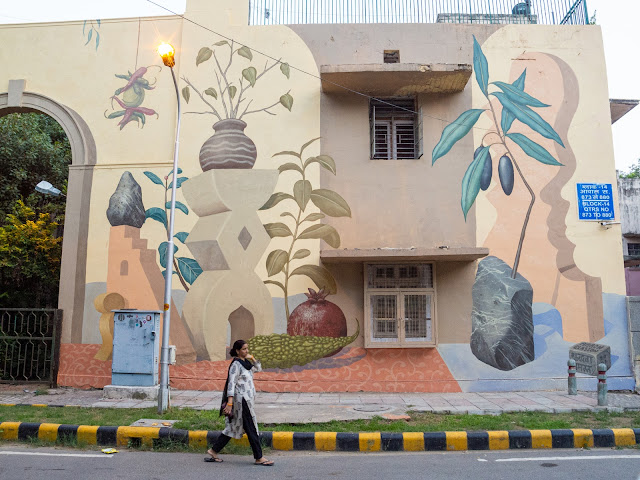 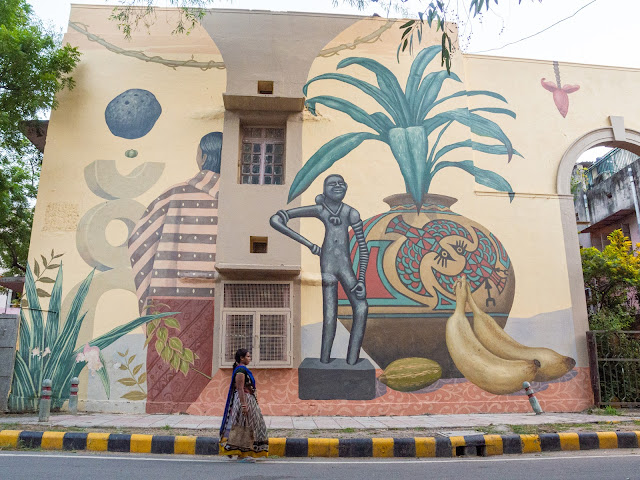 The Sacrosanct Whole by Aaron Glasson (top)
Aaron Glasson, a multi-disciplinary artist from New Zealand, now based in California, mostly creates ethereal works of street art. ‘The Sacrosanct Whole’ is about everything in this world having a life force and by that virtue, being sacred. In the mural, there are references to the ancient Indus Valley. Details such as the banana - one of the most commonly available and consumed fruit - with joined hands at the end of the stems and the pots - all bind together for the viewer to interpret on their own, according to St+art India. 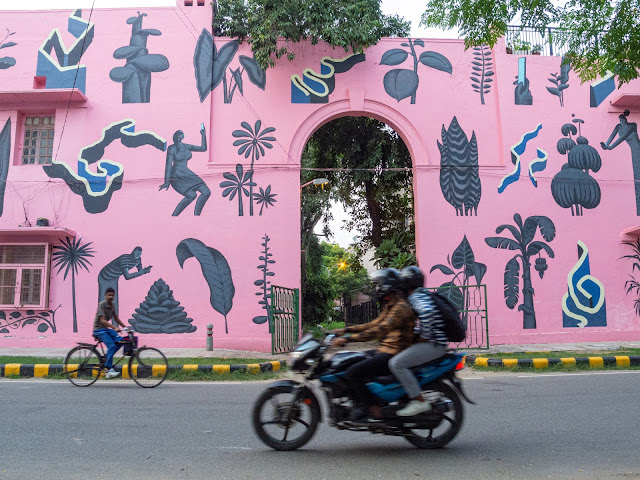 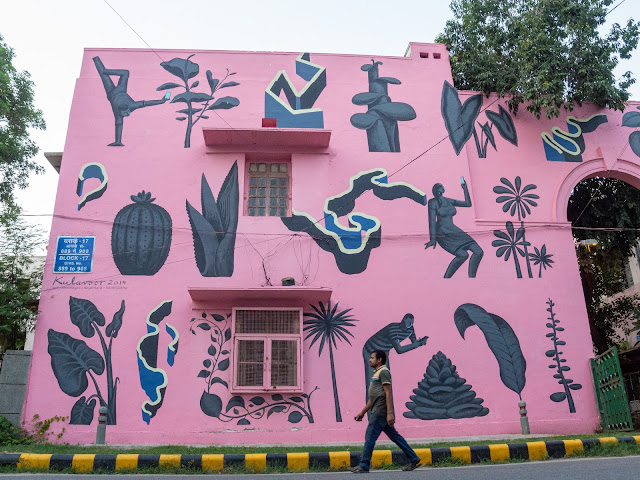 Reveal by Sameer Kulavoor (top)
Mumbai-based artist Sameer Kulavoor’s work is a part of his ongoing series on life in the digital age. “Algorithms are a process or set of rules to be followed in calculations or other problem-solving operations, especially by a computer. In the 21st century, algorithms are the basis of social media and its influence can be seen on the way we live at a micro and macro level," says Mr Kulavoor.

"They seem to have control over the human psyche - how we feel, what we think, what we eat, where we live, how we live, who we make love with, how our surroundings look like. Algorithms are said to have allegedly influenced international politics and the rise of right-wing thinking. Trolls and influencers are legit professions,” says Mr Kulavoor. St+art India volunteers Arif, Mrinmayee, Nayantara and Samriddha helped him on this project.